Visit to the afflicted areas of Fukushima 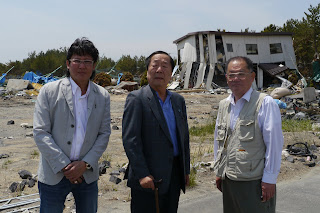 On My 26th, we left a hotel in Miyagi early in the morning and we were headed to east coast of Fukushima prefecture where were devastated by Tsunami, First, we visited Shinchimachi, which is Mr. Kawai's hometown. 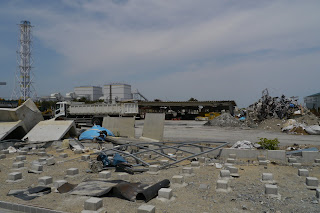 I was stunned when I got there. Even more than 2 months past, it looked so devastated. Also, there were mountains of rubble and people do not know what to do with that. 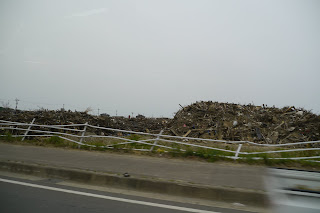 A lot of houses were washed away from Tsunami.

Mr. Kawai's office was located near by the port and it was washed away by Tsunami. You see the office was moved to the rear even though it was located in the front in the photo. 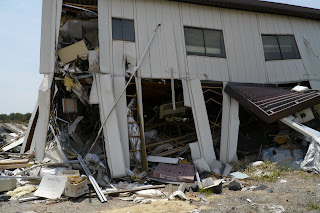 I have seen a lot of ships washed away by Tsunami and just stayed there and nobody has not be able to do anything with that. 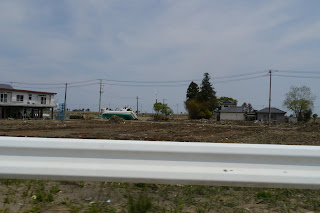 We visited a point where 20 km away from the nuclear plants in Minami Soma city. The polices were standing there and you can not go further without a permission. Japanese armies who get in there wear fully-equipped protective clothing with mask. 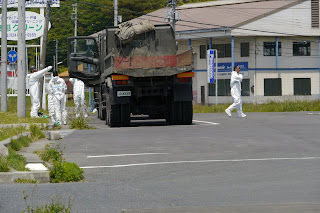 We actually brought a Geiger counter to check radiation level but it was just 0.20 mSv which is almost same as Tokyo. According to Mr. Kawai, the radiation level changes depending on the place and also direction of winds.

After that we visited a natural food shops in Soma city. These ladies are Hado members and they agreed to support our water project and distribute the MRET water to their friends and also at the charity events they organize. 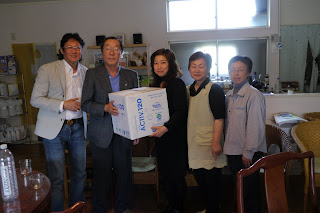 They are worried about the radiation issue. The shop is just more than 40 km away from the nuclear plants. The government does not tell us how bad the radiation can affect human bodies and they just say "it will not affect our bodies immediately." Immediately? So it will affect our body in the long term then?

With this information controlled by government, we really have to collect true information by ourselves. So , Ms. Sakai, the owner of the shop has been telling people what food are good to prevent radiation. Now she has MRET Angel water which also can protect human cells from radiations and I am sure she will distribute this water out to many people.

After we left the shop, we were headed to place where about 15 people waited for us in Mr. Kawai's home town. They were there to listen to our talk to know more about the MRET water. After the talk, they seemed very exited about the technology and we had a ceremony to give MRET water. 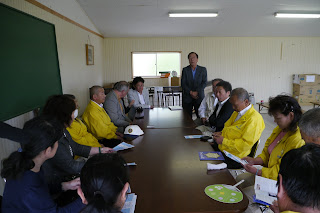 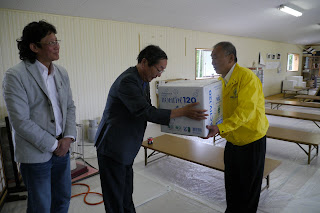 After this we went back to a hotel in Fukushima. We were so busy today like we did not have a time to eat lunch. But we were so happy to meet with these wonderful people.
投稿者 Emoto Peace Project 時刻: 18:10