Hello, Everyone! We are sorry that we have not updated this Blog for awhile. Today, we would like to post  the report on Clearing Cloud Game in Russia on 11.11.11 which the organizer sent us.


11:11 Saint-Petersburg held a world record!
On the 11th of November at 11:11 in Saint-Petersburg, one of the cloudiest cities of , the first Clearing Cloud Game or “Sky without clouds” took place; the citizens of the most beautiful city in the World gathered for the first time in the history of mankind in order to clear the clouds thanks to the joint wish.
The place for this unique experiment was chosen not by chance: being the cloudiest city of , Saint-Petersburg can burst of only 62 sunny days per year.
The transactions of Masaru Emoto, a Japanese researcher inspired the organizers to try to disprove the postulates of traditional physics; thanks to the originality of his researches, the World got a visual proof of H2O wonderful qualities, which is habitual for us.
By the appointed time in the very heart of the city more than 250 people of different ages – students, managers, teachers, Doctors of Science, pensioners,  skeptics, atheists and the representatives of different religions had gathered on Castle Square; they all were combined with only one aspiration – to take part in the realized experiment. 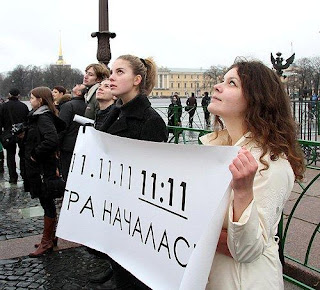 The weather didn`t let down: the clear sky could be observed in Saint-Petersburg one week before the action, but on the night of the 11th of November, a cyclone came; the sky was covered with Petersburg nebulosity; the wind speed ran up to 8 meters per second.
The performance of the game was planned for 10 minutes, but the participants spent more than 1 hour in hard wind. In 20 minutes after the beginning, unknown to each other people extemporary took each other`s hands and having formed a big circle, went on looking at the sky. Saint-Petersburg is really famous for heavy clouds – the overcast didn`t give in, but all the gathered experienced the feelings of joy and unity. 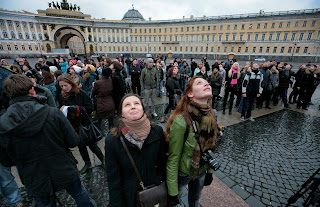 But in spite of the fact that the citizens of Saint-Petersburg didn`t achieve any convincing results, the action went down in the history forever: the world record was locked in by World Agency of Records and Achievements. Saint-Petersburg became the first city in the World where citizens gathered together deliberately in order to play “Sky without clouds” game. 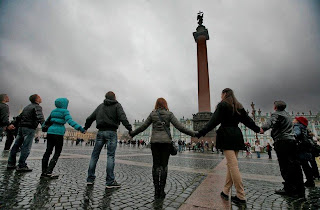 Some interesting facts were noticed both by the participants and journalists. (according to the reports of fontanka.ru and Rosbalt): from 11:11 and till 11:21 gleam`s spherical outlines of nebulosity`s substratum were seen; the witnesses also reported more than once that two hours later “a window” of blue sky was moving slowly in the Sky above Primorskiy region.
The first action in the World “Sky without clouds” aroused huge interest of Russian and foreign mass media, having been the head of the brightest events of the 11th of November on our Planet.
The representatives of central Russian TV channels, radio stations, informative agents and Internet editions were present on .
The broadcasting of this event was made by 100 TV channel; the journalists were broadcasting the informative reports about the conduction flow in on-line rate.
As a result, this project was illustrated by more than eight biggest city and federal TV channels of Russia and the countries of the Commonwealth of Independent States (1 channel, NTV, 5th channel, 100 TV, REN TV, “World” MTRK, Saint-Petersburg channel, Novin TV channel); by more than twenty radio stations (echo of Moscow, echo of Saint-Petersburg, Mayak, Golos of Russia, Business FM, Love-radio, Evropa-Plus, AvtoRadio, Dorojnoe Radio, Nashe Radio and others); by informative agents of Russia and the countries of the Commonwealth of Independent States (RosBalt, BaltInfo, Tatar Info, today.Kz and others); and by more than fifty Internet mass media (Gazeta.Ru, Fontanka.Ru, Komsomolskaya Pravda, AiF, Moskovkiy Komsomoletz, and others).
According to Feodor Zamaleev, an organizer of this action, a general director of Feodor Zamaleev & partners, the scope of Mess media interest turned out to be really surprising: “I am surprised and glad with the echo which aroused the wish to present a wonderful cause of 11.11.11 to Saint-Petersburg; belief in miracles and one`s own ability to the hearts of people.
You see, just thanks to this game, the main thing becomes obvious: our thoughts have the possibility to influence on outward things. I am sincerely grateful to Mr. Masaru Emoto who supported this idea thoroughly. And I will be sincerely happy if the experience of “Sky without clouds” game or Clearing Cloud Game will become a kind of personal experience for each person; you see, all you have to do is just to try. The question is not whether we believe or not. Now anyone who wishes is able to conduct his own experiment in order to find one`s own proof”.
Masaru Emoto, a well-known Japanese researcher, famous for his original approach to the learning of water physics, sent a greeting letter to the citizens of Saint-Petersburg: “All innovative discoveries of the past changed the picture of reality, always shocked, caused surprise, misunderstanding of those around one, but nevertheless becoming an indisputable truth of scientific knowledge. You are just round the corner of the greatest discovery of indisputable laws of the universe. And this experiment will go down in world history forever as all brave, sincere discoveries which changed the history”.
The organizers are sure that just the realization of the infinity of one`s own resources opens the door to the understanding of world`s new picture. Reality is more unusual than it seems to be and only having experienced it anyone will be able to walk over a firm bridge from rational reality to the world of wonders.
THANKS
The organizers express their particular thanks to the journalists taken part in the coverage of the action and of course to the participants, brave citizens who couldn`t be stopped either with early time, working day or skepticism. And also to the World Agency of Records and Achievements. All together we presented a wonderful and kind event to our city.
***************
It seemed that they did not get an expected result but their effort to make this event should be praised. The clouds in the Sky seemed so thick and widespread on that day so it was for sure a tough challenge for everyone who joinned. But it is very nice to know that a lot of people gathered and naturally folded hands togather to try this game together to prove the power of their intentions and the fact that this first intention experiment called "Clearing Cloud Game" was held is very meaningful for our future. There should be more challenges to come in the future and by making this succesful, we will know how our intention can influence things. We would like to give our deepest gratitude to the organizer of this event in behalf of Dr. Masaru Emoto.
投稿者 Emoto Peace Project 時刻: 16:14